What happens when a former financial analyst, a former consultant, and a former high school teacher decide they want to do something remarkable in the world of beer? One of the most unique and special breweries in the world is what happens. In 2007, while drinking craft beers at a local bar, the idea came to them and within a few years the seed had sprouted into all out research. The founders wanted to open a community-based brewery that focused not only on incredible beer but philanthropy as well. They began searching for a facility in 2012 but it took a few years of searching to find the perfect spot. Now, you can find the Virginia Beer Co just a few miles from the center of Downtown Williamsburg at 401 Second Street. 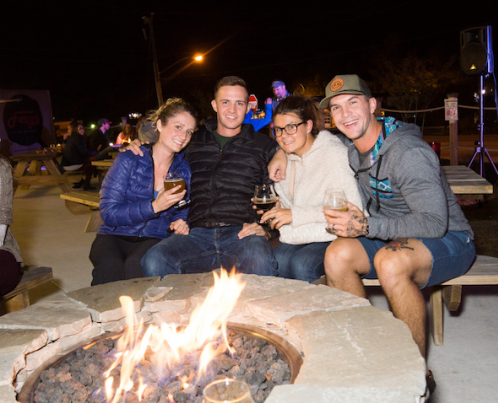 It didn’t happen as quickly as the sentences above suggest. There was a great deal of work involved but the founders didn’t remain idle while they arranged for their building and their grand opening. They discovered quickly that starting a new business and doing it right was a great deal more expensive than they’d imagined but that didn’t keep them from working toward the goal. In fact, as they did all they could to go through the financial, legal, and structural hoops necessary; they continued to work with the community and to perfect their business skills. In fact, by the time they’d settled on a location, an old garage that would have to be reworked entirely, they’d already committed to what would differentiate them. In short, it was a commitment to the craft and the community. They were excited about a growing market but also faced stiff competition.

In mid-August of 2015, they got the long-awaited go ahead from the appropriate government agencies to begin construction, and from there the work really got intense. It had been a long journey from those first seeds of ideas back in 2007 but there was progress and the actual opening wasn’t a distant possibility anymore but a definite destination. There were a number of private events in preparation for their grand opening and then on March 26, 2016, all of their dreams were realized as they opened for business. The opening was so successful they actually sold beer tickets at the door in order to keep the lines down at the taps. Three friends with an entrepreneurial spirit had accomplished what too many of us only think about doing. Their perseverance did the trick along with their love of unique beer. 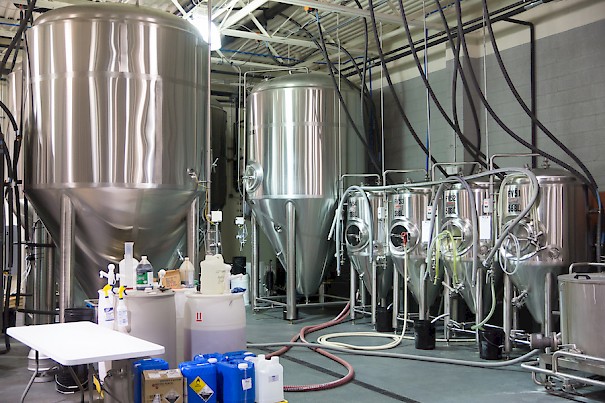 The facility itself is pretty impressive. With a 2,000 square foot taproom, there’s plenty of room for the local craft beer enthusiasts as well as the many travelers who visit Colonial Williamsburg year round. When the weather allows, there’s a 2,000 square foot beer garden as well. In short, this place is perfect for relaxing and enjoying the subtle and not-so-subtle range of flavors available when a brewmaster displays his craft.

And that’s what it’s all about, the craft.

There are actually two breweries on site. The first is the production brewery and has a thirty barrel capacity. The second has five barrel capacity and that’s where constant research and experimentation is performed perfected the craft and determining the best beers available.

There are four permanent varieties offered at the Virginia Beer Co. You simply can’t visit this brewery without trying each of these year-round varieties.

Those are the four beers available year-round but don’t think they stop there. There’s a rotating series of brews crafted using the world famous Belgian Saison yeast strain. This provides a wonderfully spicy base, and you’ll find yourself wishing they poured all the varieties at all times! You’ll also love their various small batch brews on tap. From traditional English ales to various IPAs, wheat bears, Belgian styles, lagers, and more; there’s always something exciting and wonderful available. 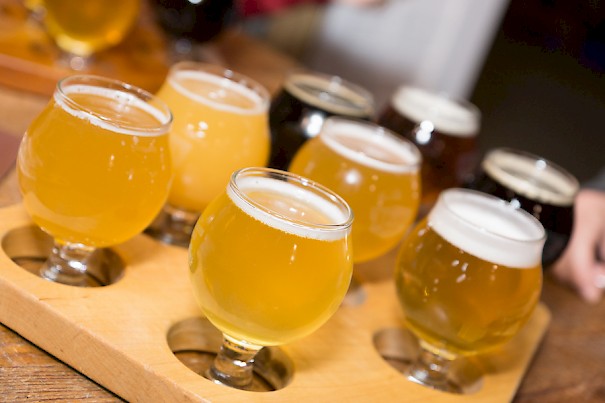 One of the most exciting trends in dining is the emergence of specialty food trucks. Just a decade or so ago, food trucks represented greasy convenience food but these days food trucks produce gourmet offerings worthy of the fanciest and most respected restaurants. Every day of the week and on most Mondays, there’s a food truck at the Virginia Beer Co, and the opportunities to fill your belly with something incredible couldn’t be more appealing.

When the Blue Crab Company food truck is there, you’ll find some of the most incredible seafood you’ve ever had from shrimp tacos to crab cakes to crab quesadillas and more. For those who don’t find ocean fare appealing, not to worry! There’s always something that didn’t come out of the water. If you’re lucky enough to be at the Virginia Beer Co when the Creekside Catering Co is there, you’ll get some of the best barbecue you’ve ever had. Divine sandwiches and other incredible offerings round out the available grub! Foodatude, appropriately described as “food with an attitude” is another great truck you’ll find frequently. With wonderful American fare and perfect touches like freshly prepared jams and jellies, they days of roller-grill hot dogs and greasy fried foods will be far behind you.

Of course, if you happen to show up on a Monday without a food truck present, that will be fine. Perhaps you’re just in the mood for some of the best Italian food you’ll ever eat. Virginia Beer Co has you covered. They’ve negotiate and exclusive menu with Antonio’s Ristorante Italiano just for delivery to the taproom or the beer garden. With fresh and vibrant pasta dishes and some of the best and most authentic pizza you’ll ever taste, nobody has to go hungry while enjoying the fabulous craft beer offerings Virginia Beer Co has to offer.

We might have a made a mistake earlier in this post. We mentioned that the grand opening on March 26, 2016 was the fulfilment of the founders’ dreams. That’s not quite true, though. In fact, the founders have never stopped pushing to learn more, experiment more, and bring new and exciting craft beer varieties into the mix. Perhaps we ought to say that the dreams are ongoing and that’s just the way we like it.

From the seed of an idea first planted back at a college pub over healthy drinks of craft beer to the large showroom, beer garden, and two-brewery institution it has already become; Virginia Beer Company is a necessary stop for any craft-beer enthusiast visiting Colonial Williamsburg. If it’s not craft beer paradise, it’s about as close as any of us can get!