Opened in 2015 by self-proclaimed Canadian tree hugger Glenn Lavender, the Silver Hand Meadery offers a truly unique drinking experience to Williamsburg. Ironically one of the newest Drink Williamsburg locations in the city of Williamsburg specializes in the oldest fermented drink in recorded history. Mead, also known as ambrosia or nectar, is a honey wine with roots in countless ancient cultures. Pottery vessels containing traces of fermented honey have been found in Northern China dating back to between 6500-7000 BC. The oldest written record of mead comes from a sacred Hindu text, the Rigveda, dating from around 1700–1100 BC. Greek mythology mentions mead repeatedly, crediting this sacred drink with prolonged life. It’s said that bees themselves were sent to the air to honor the goddess Aphrodite. Myth is not the only Greek mention of mead. Aristotle referenced mead in his philosophies about evaporation. The Ancient Norse believed that any warrior who earned their way into Valhalla would be rewarded with a draught of mead delivered by beautiful maidens. Their chief god Odin is said to have gained his strength by suckling mead as an infant from a goat. The giant Suttung had a magical mead made from the blood of the god Kvasir. This mead was said to be the origin of wisdom and poetry. The Anglo-Saxon’s believed that mead was a source of immortality, poetry and knowledge. Most high school students have read about mead in Beowulf. Celtic cultures describe a river of mead running through paradise. Even Queen Elizabeth had a favorite mead made with rosemary, bay leaves and thyme. 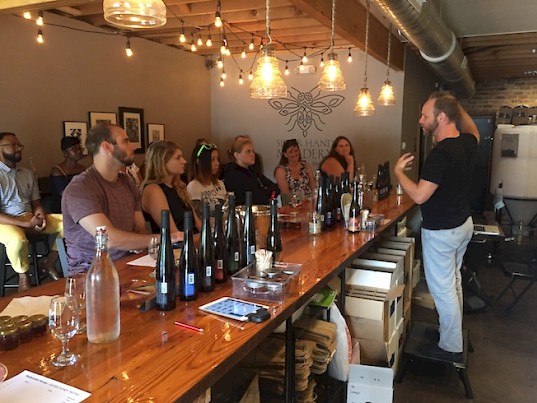 Surprisingly, the United States does not have any history of mead as honey bees are not native to North America. Honey bees did not find their way to the continent until 1622 when they were brought over by the colonists to Jamestown. In fact, all honey bees in the US can have their roots traced right back here to the shores of our own James River. It would not be until 231 years later that honey bees would make their way to the west coast. Thomas Jefferson wrote that the Native American tribes saw the honey bee as a sign that the colonists were moving into an area, calling them the “white man’s flies.” While there is no proof that this name has Native American origins, it is still a popular story among bee keepers in the US.

With such history, Glenn Lavender had a lot to work with when his environmental consciousness lead him to open Silver Hand Meadery. Glenn spent 12 years touring with award winning Christian rock band Downhere as their bassist and trumpet player. While on the road, he, like so many other musicians before him, turned to reading as a way to pass the time. One of his favorites was the Song of Albion series by Stephen Lawhead. This high fantasy series combines Celtic mythology with Christian religious themes. The trilogy, which has been in print since 1991, includes the books The Paradise War, The Silver Hand and The Endless Knot. During celebrations in these stories they frequently partake of mead, not surprising considering the presence of mead in Celtic myth and legend. In addition to reading about this ancient drink in works of fiction, Glenn had developed a keen interest in keeping bees after reading about their decline. In most beekeeping publications, there are suggestions about what to do with excess honey, including the process for making mead. When the Lavenders landed in Williamsburg they began making their own mead, opening a small production room, tasting space and retail area on Monticello Avenue. Glenn named his new venture after the second book in the series that had helped to inspire the business in the first place and so The Silver Hand Meadery was opened less than 15 minutes from where honey bees made their North American debut.

At the Silver Hand Meadery Glenn and his staff use classic recipes, new techniques and exciting natural flavors to bring a surprising amount of variety to their products. Silver Hand’s process begins with the honey itself. Honey comes in several varietals, each taking its unique flavor from the flowers in the immediate vicinity of the hive from which it was gathered. At a Silver Hand Meadery honey tasting, guests sample six different honeys, each with a unique flavor profile that comes from flowers like blueberry blossoms, orange blossoms and clover. Guests use a flavor wheel to help them identify the different flavors in the honey from sweet to savory to smoky. By using different honeys and additives Silver Hand Meadery is able to achieve an impressive variety of flavors from this little-known beverage. Silver Hand produces six different meads from the sweet Soak Up the Sun to the herbaceous Scarborough Fair, all falling somewhere between the flavor of a wine and an ale. Glenn likes to say they “mead in the middle.” 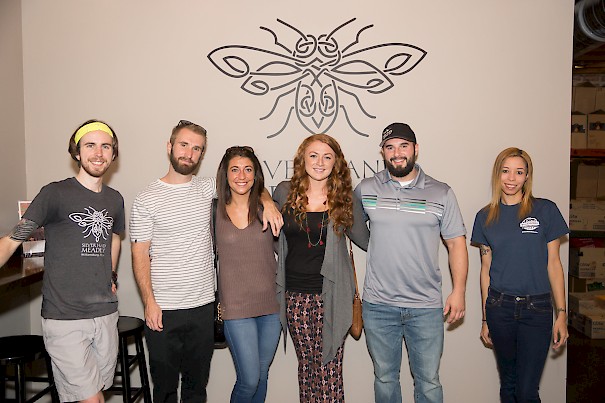 Glenn and the Silver Hand Meadery continue to take their inspirations from the arts. Each mead they produce is named for a title or lyric from a song that describes the mead itself. For example, Scarborough Fair is flavored, much like Queen Elizabeth’s favorite mead, with rosemary and thyme. The recipe is reminiscent of the lyrics from the 1960’s Simon & Garfunkel song for which this mead is named. Silver Hand’s other musical meads include Virginia Moon, All Blues, Dream by the Fire and the 2015 Mazer Cup Award Winner Terres Brûlées.

The names of their products are not the end of the arts influence on Silver Hand Meadery. You can purchase CD’s from Glenn Lavender’s bands. The Christian rock of Downhere or the folk of Hark the Herons. The Silver Hand Meadery also features local artists inside their retail space. Most of the artwork displayed inside the meadery is for sale.

The Silver Hand Meadery is a truly unique experience in Williamsburg and one that everyone should try! You are sure to find a new personal favorite from this ancient and world renowned brew.