Copper Fox Distillery began as a passion project for founder Rick Wasmund. While at a brewery tasting, he thought to himself “Hey, I can do that” and so he did.

Rick Wasmund did not immediately open his now highly praised distillery. He began with years of research, trial and error. He toured numerous American distilleries and eventually landed in Scotland. While there he interned for six weeks at Bowmore Distillery on the Isle of Islay right on the shores of Loch Indaal. Here Rick was able to participate in classic whiskey processes like floor malting and peat smoking. 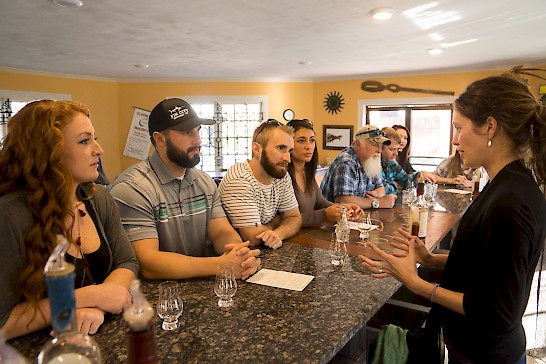 Malting is the process of turning raw grains, typically barley, into malt. Freshly harvested barley is not ideal for alcohol production because it is primarily starch and therefor lacking in the sugars required for the later added yeast to feed on resulting in fermentation. In order to turn the starch of the grains into sugar it has to be allowed to germinate or sprout. While more modern distilleries rely on what are called Saladin boxes to add the warmth and moister required for germination, many breweries, including Bowmore, rely on the classic technique of floor malting. First the raw barley is soaked or steeped for two or three day to soften it. The softened grains are then raked into a thin layer on the floor of a warm room. The partially germinated barley is called malt. The malt is then dried to stop the growing process from continuing. Traditionally this is done through peat smoking.

Peat is a brown, soil-like substance made up of layers of dead vegetation and plant material, primarily moss, that is deposited along wetlands or bogs in particular acidic environments. Peat grows at the rate of about 3mm a year meaning it takes up to 1,000 years to accumulate just one meter of peat. Peat has been used in Scotland and other countries for centuries as a gardening material or as a source of warmth and energy. Peat is categorized by the United Nations as a fossil fuel. Grains dried using peat fires gain their smoky flavor from the peat smoke.

Rick Wasmund learned these distilling methods and returned home to Virginia to begin distilling his own whiskeys using these traditions. The Copper Fox is now the only North American micro-distillery hand malting 100% of it’s barley. While floor malting in itself was easy enough for Rick to recreate, peat does not occur in the United States, and so traditional peat smoking was impractical if not impossible. This is where Rick got creative. Instead of using Scottish traditions, he turned to American traditions and chose apple wood to smoke his barley. This made his brew the first Applewood smoked whiskey in the world and as American as apple pie. Since his first batch he has expanded to use apple wood and cherry wood and coming soon will be his first batch of peach wood smoked whiskey which will be a Williamsburg exclusive. In addition to the unique use of fruitwoods, Rick is dedicated to using Virginia grains in every batch. 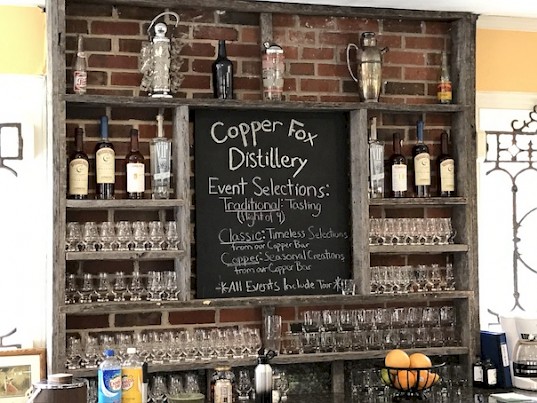 After all his research and problem solving Rick opened his first Copper Fox location in Sperryville, VA in 2005. In his first year, he produced 100 cases of single malt whiskey and now they produce more than 10,000 a year. The Sperryville locations popularity has earned them a Certificate of Excellence on Trip Advisor. It was also nominated for a Made in Virginia award in 2016 and listed by Thrillist as one of the “5 Small American Whiskey Distilleries to Watch Right Now.” Rick himself was recognized for his dedication to his craft by being featured in the award-winning film “I, Whiskey; the American Spirit.”

With the success of the Sperryville location, Rick Wasmund turned his sights on expansion. He came to Williamsburg in 2014 and toured the then neglected Lord Padget motel. The city had purchased the historic and locally famous motel with aims to resell it or, if it did not sell, to level the property. Luckily all Rick Wasmund saw at the aging motel was potential and this sprawling local became the second Copper Fox distillery, opening its doors in July of 2016. The former motel rooms are being redone to make room for a large floor malting facility that will not only provide malted grains for Copper Fox but for a number of breweries. The lobby is being reconfigured for stills. The old motel is also equipped with a 30- 35-person bar. There is even housing for their employees and Ricks own family when they visit the city. Due to the employee housing it is not uncommon to see the happy distillery folks walking around the motel with their dogs or swimming in the former motels pool before guiding guests on a tour of the distillery. 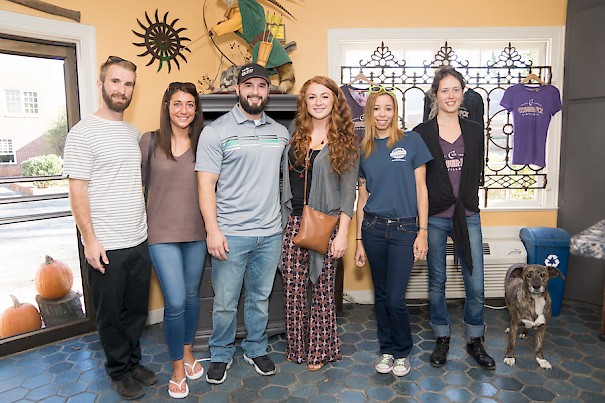 At the Williamsburg location, you can take a detailed tour, learning about the process of malting and distilling. You’ll see a variety of stills and hear what each is used for. In the barrel room, you’ll learn about the portion of alcohol lost to evaporation, known as the Angel’s share and the portion of alcohol that is soaked into barrel and lost, called the devils cut. When the alcohol soaks into the wood of the barrel, a waxy mix of sap drips from the barrel. This is called ‘barrel candy’ and if anyone on a tour offers you a taste of it do not try it. At least that’s what they tell you on a Copper Fox tour, but who knows… maybe you’ll like it. You also see their bottling process. Every bottle hand labeled and dipped in wax with their signature swirl on top.

If you are looking for some seriously special spirits, then the Copper Fox distillery is a must see on your visit to Williamsburg. Be sure to stop by next year too since the full renovations won’t be completed until then.