The Brass Cannon brewery is the result of three good friends who got very, very good at their favorite hobby and turned it into one of Williamsburg’s favorite evening locations. 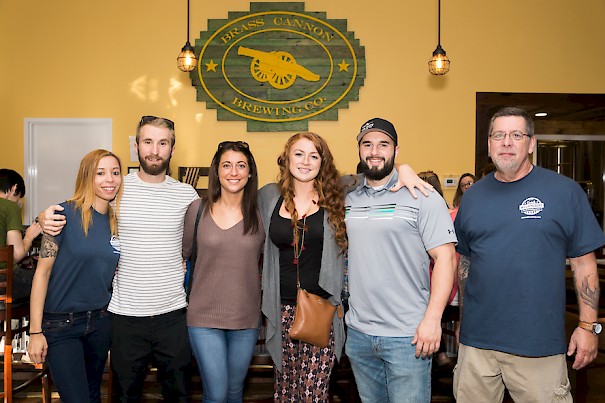 Tony Artrip, Phil Norfolk and Scott Kennedy started out has enthusiastic homebrewers making small batches of beer for themselves and their very lucky friends. An unexpected problem that arose when it was discovered that they were awfully skilled at beer creation. Their friends could not get enough and kept coming back for more and more. So, one evening, while they were under the influence of a few of their very own homebrews, Tony, Phil and Scott decided it was time to make their just for fun hobby a still pretty darn fun career. Our heroes got ahold of a small space in a strip mall in Toano, VA, just 15 minutes outside of Williamsburg. Here they quite literally cobbled together a brewery and tasting room.

Their brewery consisted of several pieces of homemade equipment constructed from leftover mechanical things that came together to form their ‘Franklin-brew’ system. There fermentation room was put together with plywood and sheets of plastic. Temperature was controlled via window mounted AC unit in the summer and space heaters in the winter. They like to say that everything that could go wrong did but through experimenting, trial and error they still managed to create some seriously tasty concoctions.

The Toano location also featured a cozy tasting room with a bar that was pieced together with old, used wooden pallets. In spite of its size and overall homemade appearance this spot drew in plenty of folks from Lanexa, Williamsburg and Toano. 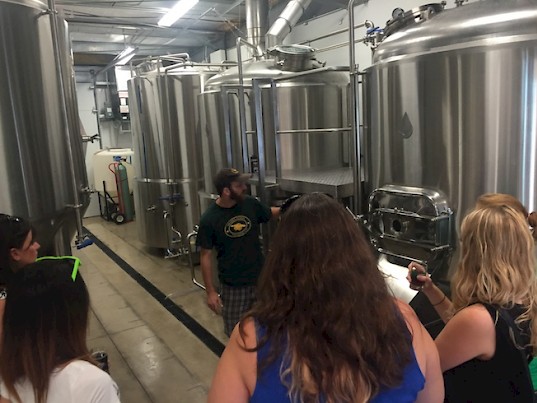 While they were experiencing success in Toano, Tony, Phil and Scott’s location was far from ideal. Their brewing system was functional yet labor intensive making it very difficult to control all the variables that go into creating unique beer varieties. Their tasting room could barely fit the crowds their tasty beers were drawing in. Brass Cannon Brewing would need a much larger space in order to accommodate both all of their fans and all of the guys’ ideas.

The search for a new location led Tony, Phil and Scott to an unfinished building in Williamsburg. Since they found it before it was completed they were able to make some changes to parts of the building’s plans so that it best fit their needs, customizing the ideal brewing and entertaining location. They moved into this new space in April of 2016 and said goodbye to their old Toano location along with their “Franken-brew” system and homemade. The new Williamsburg spot sports a much for sophisticated system that is visible through large glass windows from the spacious tasting room.

One entire wall of the tasting room is covered by a chalkboard where guests can show off their creativity and skill. This is a tradition that followed them from the Toano location. Particularly good doodles will find themselves on Brass Cannons website. The new Williamsburg Brass Cannon has a large patio perfect for enjoying tasty brews and meals from the variety of food trucks that rotate through the parking lot. Brass Cannons added space is perfect for events and the guys have taken full advantage of that space by filling it with live music, holiday parties and celebrations. In the tasting room, they offer that right at home feeling by offering a number of board games for guests to play while they sample from the huge selection of beers offered at Brass Cannon Brewing.

While the new brewery and tasting room is so gorgeous that you may never want to leave, it is not the only place you’ll find Brass Cannon Brewing’s beers. Tony, Phil and Scott frequently leave the bar in the hands of their capable and friendly staff so they can take the show on the road. Bringing delicious brews to events ranging from golf tournaments to craft beer festivals. To see the guys will be out and about you can keep an eye on their website to see the list of events they will be visiting next. 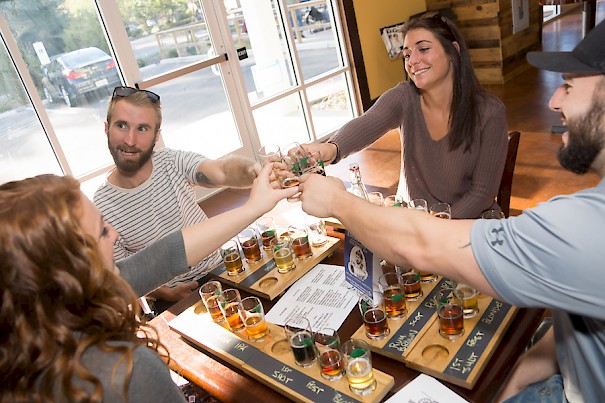 It wouldn’t be Brass Cannon without the beers that made them famous to the locals and visitors alike. Firstly, they offer five year-round selections. The Angry Scot described as a ‘wee heavy ale’, at least on the t-shirt, is a Scottish ale with a unique smokiness, smooth and malty with minimal hoppyness. The Barrage Brown Ale is of an English style with American influences, made with UK and US grains. Muzzle Flash American Amber is hoppy with little bitterness, medium with a sweet finish. Broadside IPA, whose name was chosen from a Facebook vote, is made with American and English hops and finally Smoothbore Stout a black ale with flavors of coffee and dark chocolate.

Brass Cannon Brewing also offer a specialty beer for every season. Their first ever seasonal beer debuted in the summer and so every summer it returns. The Split Shot is an American wheat ale with 50% malted wheat and 50% malted rye. Their autumn brew Kanonefest is a Märzen style beer perfect for all your Oktoberfest celebrations. In winter, you can sample the Great Turkish Bombard, a sweet and spicy beer with added dark roasted, fine ground Ethiopian harrar coffee. Finally, in spring Brass Canon offers up a light and crisp gluten free beer they call St Barbara Heather Ale.

If you aren’t satisfied with all of their scheduled beers from year-round brews to seasonal favorites, you can try what Tony, Phil and Scott call their Langrage line. Langrage is an old colonial war practice born of desperation, when soldiers ran out of cannonballs and would fill the cannon with whatever they could find from silverware to bones. Brass Cannon takes a similar approach with their more experimental brews. When they create a small batch, or try something new then they put it on tap as part of their Langrage Line, essentially throwing whatever they have at you just like the cannoneers of old. There is no schedule available for these often-experimental small batch beers and so your best bet to visit frequently to see what new on the line.

Brass Cannon is a testament to friendship, trial and error and determination. The story and success of Tony, Phil and Scott gives hope to all those homebrewers out there who are learning and perfecting their craft. So, head out there and taste what Brass Cannon Brewing has to offer.